skip to main | skip to sidebar

I finished this beautiful sweater: 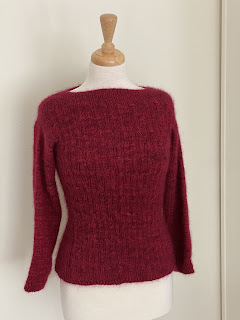 Pattern: Silver White Winters by Mary Annarella
Yarn: West 7th Wool Yarn Hunters Sock in Apple Seed and Madelinetosh Impression in Fatal Attraction
Comments: Mary’s patterns are always clearly written and fun to knit. West 7th is my LYS and they started dyeing their own house line in fabulous colors. It’s really nice and of course, red is my default choice. I can’t wait to wear it, but it may not be until next year.
MK out.
Posted by Merry Karma at 12:42 AM No comments:

It’s a new month, Y’all! What do you plan to accomplish this month? I’m hoping to watch tons of movies. I think I’m off to a good start.

I Care A Lot is about a woman who defrauds old people, by being named as their guardian. She gets help from an unethical physician and an unsuspecting judge. She gets more than she bargained for with her latest mark. Rosemund Pike, Peter Dinklage, Dianne Wiest, Alicia Witt and others star in this film. It was good.
Based on a true story, The Trial of the Chicago Seven covers the arrest and trial of a group of anti Vietnam War factions who came to Chicago to protest during the Democratic National Convention in 1968. Many big names star in this film, including Sasha Barron Cohen, Eddie Redmayne, Michael Keaton, Mark Rylance, Frank Langella and Joseph Gordon-Levitt. It was very good.
Set five years after the Civil War, News of the World, features Tom Hanks as a former Confederate officer now traveling around Texas reading news stories to crowds for ten cents a person. He encounters a 10-yr-old girl who had been taken by the Kiowa Indians years prior. She is now to return to her biological aunt and uncle, and the job falls to the captain. Together, they navigate the treacherous terrain. It was really good.
Kristen Bell and Kelsey Grammer star in Like Father. Rachel is a busy, young executive who gets dumped on her wedding day. Unbeknownst to her at the time, her estranged father had come to her wedding. Later that night, he goes to her apartment to offer some moral (and liquid) support. In her drunken state, Rachel ends up asking him to join her on what would have been her honeymoon cruise. It was cute.
MK out.
Posted by Merry Karma at 11:15 PM No comments:

I've decreased my reading goal for this year to 24. Fifty is very doable, but I haven't been traveling as much...

The Midnight Library by Matt Haig
Nora has just lost her job and her cat in the very same day. She wants to end it all, but ends up in a special library that allows one to try out different lives. Have you ever wondered about what would happen if one decision in life was changed? How would the resulting chain of events unfold? It was very good.
Heartless by William Boyd
A daughter finds out her mother is really Russian and was a British spy in World War II. Can she help her evade demons from her past? It was good.
MK out.
Posted by Merry Karma at 9:57 PM No comments:

I'm still not finished with this sweater: 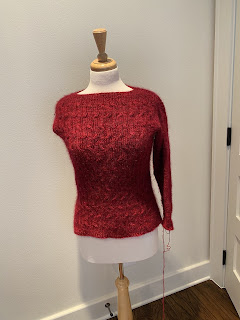 I'm also a little stalled on this hat: 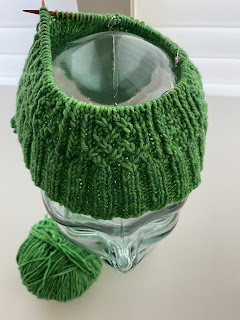 The main reason the knitting is on a back burner is because I've been sewing: 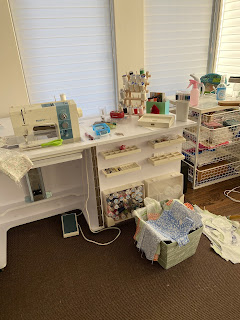 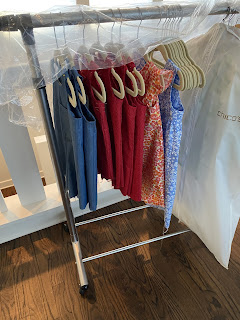 Island Baby has a market coming up.
MK out.
Posted by Merry Karma at 9:29 PM No comments:

Last week was a banner week for movie watching. Texas experienced a once-every-thirty-years ice storm, courtesy of an Arctic blast. Many people lost power and water - some still don't have it restored, even though it got up to 70 today. We were among the fortunate. I don't drive on that stuff, plus nothing was open; so, I had the chance to catch some flicks.

In the 1960s, Bill O'Neal is recruited by the FBI to gather information about Chicago's Black Panthers leader, Fred Hampton, in exchange for not being charged with car theft and impersonating an officer. Judas and the Black Messiah tells the story. Daniel Kaluuya, LaKeith Stanfield, Dominique Fishback and Jesse Plemons star in this film. The acting was great. It's based on true facts. It was very good.
Denzel Washington, Rami Malek and Jared Leto star in The Little Things. Washington plays a seasoned detective, dogged by a crime he could never solve, who joins forces with a young detective (Malek) on the hunt for a serial killer. Jared Leto delivers a strong performance as their number one suspect in the case. It was pretty good.
In Malcolm and Marie, Zendaya and John David Washington play a couple. He's a filmmaker and she's his girlfriend who has acted in the past. They come home after the premiere of his latest film and spend the night arguing. They take turns having a meltdown. The acting is great, but I got tired of the back and forth. The film is shot in black and white, which was kind of cool. Overall, it was alright.
After Emilia Clarke hung up her mother of dragons cape, she starred in Last Christmas, a little rom-com about a girl who works in a year-round Christmas shop. In her off hours, she attends auditions for singing jobs and she tries to get her stuff together. She meets a mysterious guy who inspires her to be better. Henry Golding, Michelle Yeoh and Emma Thompson also star. It was cute.
I'd been waiting for Nomadland to be released on a streaming platform for many weeks.  Frances McDormand plays Fern, a woman who has lost everything when the only real employer in her town closed. She sells off possessions to buy a van and hits the road, taking seasonal jobs when she can. She meets people in similar circumstances along the way. Some people who live this lifestyle played factionalized characters of themselves. It was really, really good.
MK out.
Posted by Merry Karma at 7:29 PM No comments:

I’m finally on Sleeve Island with this sweater. 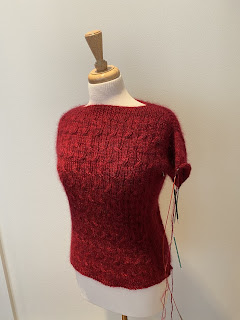 It’s taking a long time because I’ve been busy sewing for the biz. I’m also doing one sleeve at a time because I’m already carrying two balls of yarn. Four would do me in.

If this sweater were finished, I could wear it during the Icecopalypse we are currently experiencing. Oh well.

Posted by Merry Karma at 8:06 PM No comments:

One Night in Miami depicted a fictional night where Malcom X, Cassius Clay, James Brown and Sam Cooke got together. Each a legend in his field, the men examined how they could contribute to the fight for civil rights. It was good.

Pete Davidson helped write and starred in The King of States Island. Apparently, it was semi-autobiographical. Davidson plays Scott, a high school dropout, whose fireman dad died in a hotel fire when Scott was a young boy. He's now 24 and still living at home, with no real career options. His mother (played by Marisa Tomei) starts dating a fireman, and Scott doesn't like it. Y'all, it was surprisingly good. I really liked it...a lot.
I've recently binged Firefly Lane with Katherine Heigl and Sarah Chalke - a 10-episode Netflix original series. Best friends since they were fourteen, the episodes chronicle Kate and Tully’s adventures into adulthood. The show is adapted from the novel of the same name by Kristin Hannah. I have not read the novel, but I know the series deviates from the book somewhat. I don’t know if I will read the book. It ended on a cliffhanger. I hope the story continues. It was so good.
MK out.
Posted by Merry Karma at 11:57 PM No comments:

Merry Karma
I am a girl with many interests. I hope you enjoy reading about some of them.

All content on this blog, including written content and photographs, are my sole property. Please do not use anything from this blog without my express, written permission. Copyright (c) 2007-2020 Mary Kay Bishop/Merry Karma